Don’t tell my Beagle, but I’ve fallen in puppy love. My friend Shannon and her family just adopted an 8-week-old puppy from a local shelter, and she is puppy perfection – a fluffy white Lab mix with a touch of butter- 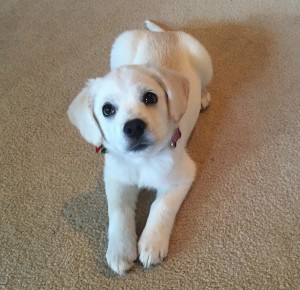 colored hair on the tips of her floppy ears.

Shannon has been texting me puppy pictures – snapshots that could easily be featured in a “Cutest Puppies of 2016” wall calendar. With her white fur and coal black eyes, she looks like a snow-white baby seal. After some heavy hinting on my part, Shannon’s daughter appointed me as the puppy’s official Godmother. So I went to their house to play with my God-dog, who licked my face, snuggled under my chin and then pounced on the dog toy I threw for her. Oh, it was fun.

When I went home later that day, our middle-aged dog, Charlie, was waiting for me by the door. I felt guilty that I wasn’t nearly as enthralled with him as the fluffy new puppy. I’d cheated on my dog with a younger model. He didn’t seem to mind, though. He spun excitedly around in circles when I asked if he wanted to go outside.

Lately Charlie has been embroiled in an ongoing battle with one very elusive squirrel. Once outside, he sprints toward the tallest tree, wailing away with the high-pitched, frustrated bark of a dog who knows that the bark is 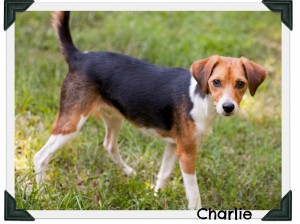 all he’s got. By the time he gets there, the squirrel has scampered up a tree that Charlie knows he’ll never be able to climb. But that doesn’t stop him from pointlessly barking up at the tree – a habit that hasn’t endeared him to the neighbors.

In Charlie’s defense, the squirrel is not a gracious winner. I’ve seen this squirrel run across the top of the wooden fence while Charlie runs alongside it barking like a maniac. Then the squirrel stops and stares down at the poor dog, taunting him from his lofty perch. If I’d been watching through binoculars, I bet I would have seen the squirrel stick his tongue out at the Beagle, the same way the Road Runner mocks Wile E. Coyote.

Inside the house, Charlie works on his napping skills. He steps onto a blanket on the sofa, turns around on it three to four times and then settles down, curling in on himself with paws tucked under his body. Within seconds, he falls asleep and slowly stretches out until he’s on his back with all four paws in the air, snoring softly and passing a silent-but-toxic series of dog toots that make me wonder if he’s eating rotten cabbage.

Despite his quirks, we love Charlie. He may be crazy and stubborn but he’s ours. I’m reminding myself that new is always alluring and exciting. And it’s easy to love anything – a puppy or a person – from afar.

Shannon tells me that, although they love her like crazy, the new puppy can also drive them a little crazy. The teething phase is so intense right now that they’ve nicknamed her “the land shark” because she’s constantly cruising around looking for something to gnaw on. She also likes to whine when she’s left alone, unroll the toilet paper and shred paper towels until the room looks like the aftermath of a ticker tape parade. In short, a new puppy is much like a determined toddler minus the diapers.

So perhaps I should just enjoy my puppy love in photos and short visits and then come home to my hard-headed, squirrel-chasing, gassy Beagle who has learned to love me despite all my quirks, too.