Dear Inside His Head,

My husband and I totally disagree about when our daughter can wear makeup or the types of events she can attend with her friends (NOT dating). He wants her to stay his “little girl” and thinks that we should make sure she’s not growing up too fast. The thing is, he’s just pushing her away.

She just turned 14 and I don’t think a little mascara and lip gloss will hurt, but I’m trying to maintain the “united front” with my husband. On the other hand, I think he’s being unreasonable. I don’t want her to grow up too fast either (believe me), but there are ways to negotiate some of her smaller requests. I don’t want her to rebel because we were too strict. Whew!

Any ideas about how I might handle this with my husband?

GRAY: The reality is that at 14 years old your daughter already isn’t anyone’s “little girl” anymore. She’s only two years shy of being able to drive on her own. I think you need to ask your husband how can she be expected to handle that kind of responsibility if he won’t let her learn how to handle lipstick.

And I get where he’s coming from. I don’t want my daughter to grow up faster than she has to, but there’s a point where that sentiment is harmful. And, really, if he stays that strict she’s going to do it anyway and then start lying about it to both of you. 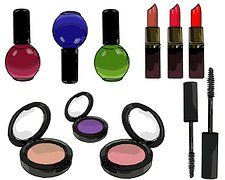 The other option is to show him that he can have a lot more control over her choices if he agrees to let her buy makeup. It puts him in a position to be involved, limit choices he considers too wild. Probably more important is you’re giving her the trust to wear it responsibly – not to mention simply learning how to use all that stuff. (We guys probably don’t know how easy we have it by just running a razor across our face before we face the public.)

Ask him what he would have done if the tables were turned – all his teen friends doing something and him being the odd man out. Being a teen can be hard enough without unrealistic limits being pushed on you.

A little makeup is probably a huge deal to her even though we have to recognize it’s pretty small potatoes in the grand scheme of things. Find more important battles to draw a line on, such as curfews and rules for those date nights that are sure to be around the corner.

MAVERICK: The thing here is at least you have a clear idea of his motivation – that he doesn’t want her to grow up too fast — which most dads can relate to.

Most guys also don’t have a whole lot of experience with makeup. Most of us know it exists, and we like it’s impact, but we don’t really know how it functions, like sunlight, or light beer.

Explain that makeup is a basic rite of passage for most girls. And let him know you can start slow, with a little bit there and a little bit there. If he’s resistant, give him some time to get used to the idea by saying she can start, say, next week, or next month.

And you can consult with him and set some basic guidelines on how much makeup and when and where your daughter can wear it and then allow those rules to be expanded as your she matures.

It sounds like his heart is in the right place. He just needs some education and some patience and I bet he’ll come around.

My guess is your daughter is more concerned about what other girls think about her looks than what the boys think about them. I think if you could talk to your daughter about the reasons behind why she wants to wear makeup or go places and frame it in logical arguments, you’ll have a better chance or making headway.

Remember, most males are rational creatures and when presented with good arguments eventually concede.

There’s so much estrogen here on Southwest Missouri Moms, we love hearing what the guys have to say from time to time. We’re always wondering, “What was he thinking???” and our anonymous panel of husbands fills us in. If you have a question for the dads, email us and we’ll send it to them. Then look for your answer here. Email to: info@SouthwestMissouriMoms.com