Today I’m sharing important research I’ve compiled here in the parenting trenches that may help my fellow parents gain more insight into why we’re so annoying.

While driving them back from yet another after-school lesson, one of the three kids in the car began to drum on the armrest. (Have you ever noticed how almost all boys under the age of 20 have a tendency to drum on things? Desks, tables, cars, legs, and almost any hard surface? I think they’re born with it. I call it the Ringo Starr gene.) After four miles of drumming, it got annoying so I asked him to please cut it out.

But it made me wonder: What do I do as a parent that annoys the kids? So I asked. “Kids, I’ve got a question. I want you to answer it honestly, and I won’t get upset at all. I’m just curious. What do parents do that annoys kids?” 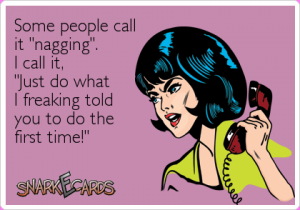 “Nagging! It’s definitely nagging,” said the teenager, who answered far too quickly and confidently for my taste. “Because you do it a lot. And it’s annoying. And irritating. Especially when you do it when I’m trying to relax and play video games. Nag, nag, nag, nag, nag…”

“I get it. Thanks for your input,” I said, cutting off his string of nags. I looked over to the other two kids and waited for their response. “What about you guys? What annoys you?”

The middle child just sat there looking hesitant, as if he was about to tiptoe across a minefield. “That’s a hard question, Mom.”

(I knew I liked this kid. Bonus points for acting like it’s tough to think of anything I do that’s annoying.) “Oh, come on. I’m sure there’s something I do that you don’t like.”

“Oh, is that right?” I said while performing a dramatic eye-roll. “Just give it your best shot.”

“Okay, I’d have to go with yelling. I really don’t like when people yell,” he said.

“Fair enough. And for the record, I don’t like yelling either. It’s just that sometimes it feels like yelling is the only way to get you guys to hear me because sometimes you don’t listen the first few hundred times I say it.” I stopped myself at that point because I’m pretty sure I heard the oldest one muttering the word “nag” under his breath in the backseat.

I turned to the youngest, my sweet, precious 8-year-old baby. “What about you? What annoys you?”

“Well, I really don’t like it when parents get mad and use a kid’s middle name. It’s scary to hear your middle name.”

I nodded my head, doing my best to stifle the laugh. Parents have been doing the “middle name thing” for decades now. When my own parents did it to me, I knew it was the warning shot over the bow. It was the flash of lightning that comes a second before the deafening clap of parental thunder.

By the time I’d collected all this riveting research, we’d arrived back home. As the kids began climbing out of the car, I thanked them for participating in my research. But they didn’t hear me, probably because I didn’t yell it and they were too busy drumming on things and playing apps on their phones. I was going to repeat myself but I’m pretty sure that qualifies as nagging, and far be it from me to be annoying.

Gwen Rockwood is a mom to three great kids, wife to one cool guy, a newspaper columnist and co-owner of nwaMotherlode.com. To read previously published installments of The Rockwood Files, click here. To check out Gwen’s book, “Reporting Live from the Laundry Pile: The Rockwood Files Collection,” click HERE.