A wonderful thing is happening at our house. The kids are becoming… capable. That sounds weird, I know. It’s not like they were helpless blobs all this time, but lately I’ve noticed they can really do things – helpful things, necessary things – things Tom and I have been doing for them for more than a decade now.

Today I was busy cleaning up the kitchen and making a mental checklist of the things I’d need to get done before morning. I caught 12-year-old Adam as he was on his way up the stairs to play video games and said, “Before you play, I need you to make three sandwiches to go in tomorrow’s lunchboxes, okay?”

“Okay,” he said. Then he pulled out the sandwich-making supplies and I heard him call out to his little sister, “Kate, do you want cheese on your sandwich?” 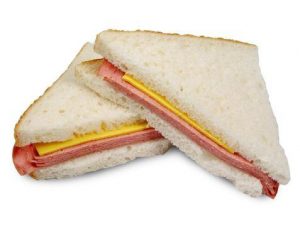 She answered and he continued his work. Moments later, I opened the fridge and found three bologna sandwiches sealed up in sandwich bags, ready to put into lunch bags the next morning.

Here’s the surprising part. He didn’t need my help. He didn’t complain. He didn’t act like I was asking him to perform brain surgery on the cat. The sandwiches looked just the way they’d look if I’d done it myself, and he put the bread, mustard and sandwich meat away when he was done.

It’s odd to be surprised by evidence that your kids are growing up because that’s what they’re supposed to do. That was the plan all along. But it feels like a minor miracle when you notice it’s really happening.

We spent so much time doing things for them when they were little that it became our new normal – tie the shoes, wash the clothes, make the meals, cut their meat. We’ve taught them things along the way, but there was a small part of us that assumed they’d always need us to help them navigate daily life.

Then today, either through instruction or observation or just household osmosis, the kid suddenly makes the sandwiches and cleans up the mess. No biggie. And it’s so… rewarding.

If I could, I’d send an email back in time to my younger self – the frazzled young mom who spent much of the day chasing a 5,3 and 1-year-old around the house, changing diapers and wiping noses. Here’s what I’d tell her:

You know this parenting thing that keeps you sprinting around 12 hours a day? It gets easier. One day they’re not only going to be able to find their own shoes but also put them on and tie the laces. They won’t need you in the bathroom anymore. They’ll stop watching Barney the Dinosaur and occasionally even watch the news and ask questions about the world. They’ll start to crack jokes – funny ones — not just that tired knock-knock joke about the banana and the orange.

Then one day, seemingly overnight, you’ll ask your oldest to make the sandwiches and he’ll just do it. Your middle child who refuses to change out of his Superman t-shirt for days on end? He’s going to be able to start and finish a load of clothes, so you’ll have help staying on top of that mountain of dirty laundry. And that sweet baby on your hip? She’s going to be 7 one day, and when you accidentally cut your finger in the kitchen, she’ll get the first aid kit and put the Band-Aid on for you. (Start putting some money aside for medical school. This kid has potential.)

So hang in there, mama. You’re doing good and important work. All this time in the not-so-glamorous parenting trenches is going to pay off. They get bigger and smarter and even more interesting. One day you’re going to look at them and realize that, not only do you love them intensely, you also respect and admire the people they’re turning out to be – capable people who can do things, partly because you loved and helped them through all the years when they couldn’t.

Gwen Rockwood is a mom to three great kids, wife to one cool guy, a newspaper columnist and co-owner of nwaMotherlode.com. To check out Gwen’s book, “Reporting Live from the Laundry Pile: The Rockwood Files Collection,” click HERE.