Charlie Brown and I have something in common. We’re both in love with and completely exasperated by a beagle.

My fondness for Snoopy was one of the reasons I happily welcomed a beagle into the family nearly four years ago. The kids named him Charlie. At the time, I had no idea how many times I’d stand at the front door and call that name over and over again, waiting for our wayward beagle to come home.

Perhaps I should have known a beagle would be trouble. There were plenty of clues in the Peanuts comic strip that should’ve tipped me off. Snoopy clearly had 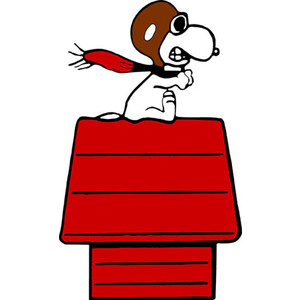 a passion for adventure, as evidenced by those daredevil flights as the Red Baron. And he was always more interested in his own agenda rather than blindly obeying his master.

I have two theories about our Charlie: He’s either the dumbest dog I’ve ever known or he’s the smartest and the most stubborn. My conclusion depends on the day and what kind of trouble Charlie has dug up for himself.

Charlie’s favorite kind of trouble involves a backyard prison break or, if he’s inside the house, it’s a “door dash.” Door dashers are dogs who wait for any door to open even a crack, and then they fly past you in a blur, streaking toward the outside world. We hired a dog trainer to help us break this habit. Although the training helped, even the dog expert warned us that it’s nearly impossible to overcome the power of a beagle’s nose. It’ll lead him to adventure every time.

If one of the kids lingers at the door too long or if one of us forgets to tell Charlie to “park it” (which is a shorter way of saying “Don’t run out the door”), Charlie forgets his previous training and sprints toward freedom. It’s useless to chase or call him because he can’t hear us. He’s too busy sniffing and mentally chanting the word “Squirrel! Squirrel! Squirrel!”

For dogs like Charlie, new outdoor territory is a fascinating action-adventure novel. Anyone who has ever stayed up too late at night reading a suspenseful book can understand the lure. To Charlie, every mound of dirt is mesmerizing. Every breeze is spellbinding. Every telephone pole tells a story.

The only good thing about a beagle’s insatiable nose is that, although it leads him away, it also helps him find his way back home, looking as guilty as he is – knowing the price of his adventure will be another bath.

Often, instead of coming home, it’s over the driveway and through the woods to Grandmother’s house, he goes. My parents live in a townhouse just a few blocks away, and Charlie sniffs his way there for a visit with their dog named Boots. He barks at their back door, and they let him in and give him multiple treats and then a nap in one of their plush recliners.

Mom’s theory is that by rewarding him, he’ll come to her house when he runs away instead of playing in the street. When Charlie goes missing, I get a call from Mom when he shows up over there. I can’t blame him much. If my human kids ran away, that’s where they’d go, too. At Grandma’s house, there’s a 99% chance that someone will be cooking bacon and an even better chance that a furry visitor will get a bite or two.

Mom says if I’d get Charlie his own recliner and feed him more table scraps, he’d probably stay home. And to that I reply with what Charlie Brown would probably say after groaning and rolling his eyes: “Good grief!”

Gwen Rockwood is a mom to three great kids, wife to one cool guy, a newspaper columnist and co-owner of nwaMotherlode.com. To read previously published installments of The Rockwood Files, click here. To check out Gwen’s book, “Reporting Live from the Laundry Pile: The Rockwood Files Collection,” click HERE.