A child preparing to be born asked God, “They tell me you are sending me to earth tomorrow, but how am I going to live there being so small and helpless?

God answered, “Among the many angels, I chose one for you. She will be waiting for you and will take care of you.”

The child paused and again addressed God, “But tell me, here in Heaven, I don’t do anything else but sing and smile, that’s enough for me to be happy.”

“Your angel will sing for you and also smile for you every day and you will feel your angel’s love and be happy,” God replied.

“Oh,” the child said, “and how am I going to be able to understand the language that men speak?” And then, glancing at God the child asked “What am I going to do when I want to talk to you?”

God softly touched the child on the head and said, “Your angel will place your hands together and will teach you how to pray.”

The child then asked, “I have heard that on earth there is evil. Who will protect me?”

“Ah,” God answered, “your angel will defend you, even if it means risking her own life.”

“But I will always be sad because I will not see you anymore.”

“Your angel will always talk to you about me and will teach you the way for you to come back to me, even though I will always be next to you,” God said.

At that moment, there was much peace in Heaven, but voices from earth could already be heard, and the child in a hurry asked softly, “Oh, God, if I am about to leave now, please tell me my angel’s name.”

Sweetly, God looked at the child and whispered, “Your angel’s name is of no importance. You will simply call her Mom.”

My preschool sons were huge Superhero fans!  They rushed home from kindergarten every day to change into the Batman and Superman costumes Grandmother made them, just in time to watch Superhero cartoons, lying on their Superhero pillowcases.

One day they had a question for me, “Can’t Superman come to our house some day?”   Sadly, I had to break the news to them that this was not going to happen.

“But what about the newsmen and the President?” Jay asked.

I stammered a bit, “Well…yes…so okay…some people on TV are real…and some are not.  Some of the stories have really happened, and some are make-believe.”

I realized that a BIG part of my job as a parent was to teach them what is REAL, and what is not!

Foundational to their understanding of the truth of what is real, is a firm understanding of God.  God’s very nature is rooted in truth.  His Word tells the true story of the world, how it originated and why it’s in turmoil today.  It outlines God’s boundaries for human behavior and gives reassurances that these are for our good.

Children need firm teaching about the unconditional love of God and the wisdom of His way.  For the rest of their lives, their emotional well-being will depend upon how well they can sort out God’s truths from the lies satan will drop into their minds to confuse them!

So above all, we must teach them God’s Word is REAL.   If children grasp that God really did create the world, and send a great flood, and part the Red Sea, and send a Savior…then they are more likely to hold firm to the finer points of obedience to God, when they are older.  Establish the foundational truth of scripture, while they are still young.

All of these present the truth of Bible events, in the historical order that they occurred.  It is important to choose a collection that arranges Bible stories chronologically, not jumping around randomly between Old Testament and New Testament events.  This gives the child a clear vision of how God worked in the world from creation to Christ.

While they are young, establish a habit of sharing with your children the truth of God’s Word, and help them understand that Bible stories are real, while many of their other story books are pretend.  Don’t let them confuse Superman and Batman with the true superheroes of the Bible, who walked in righteousness and demonstrated the power of the Living God.

“Train up a child in the way that he should go, and when he is old, he will not depart from it.” Proverbs 22:6

Ever have those days you feel like your are failing? We do.

This video though…. It is a good one mommas! Take a minute to watch this and be encouraged. YOU were made for this!

It’s that time of year where school has begun and after school activities have overtaken our evenings and weekends. As we tackle all of these tasks and run our 101 errands for the week, are we neglecting the most important thing? Are we taking the time to pray for our children, and to pray with them?

Yes, activities for our children are great for them. It’s a great way to build their morale, keep them active understand the value of being a team player, ect. However, are we becoming to exhausted to pray? Have our prayers became routine?

Imagine if we invested as much time and effort praying for our kids as we spend on their sports activities, buying their uniforms, going to their practices, their games, and cheering them on at the game!

It’s great to be successful in school and it’s also awesome to be the star athlete, but remember God measures success differently than we do.

If we aren’t praying for our children it leaves our children wide open to the temptations of the enemy. Peter 5:8 says the enemy of our souls is on the prowl, ever looking for someone to devour. That means we are targets… me, you, our spouses, our children. 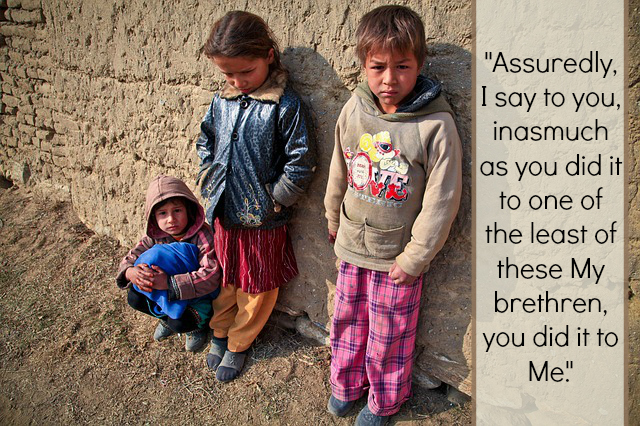 I hope you and Atticus have had a good week since my last letter. I’ve re-read it this morning, and I think my advice still stands: “When it comes to the developing faith of your children, PRAY—don’t panic.”

And after giving it some more thought, I’ve reached a conclusion. As parents, we are usually very poor judges of where our kids are in their relationship with God. I have a good reason to believe that, because that is what the Bible teaches. Jesus said that individuals are not even good judges of their OWN relationship with God.

Take a look at this passage:

Matthew 25:31 ¶ “When the Son of Man comes in His glory, and all the holy angels with Him, then He will sit on the throne of His glory.

32 “All the nations will be gathered before Him, and He will separate them one from another, as a shepherd divides his sheep from the goats.

33 “And He will set the sheep on His right hand, but the goats on the left.

34 “Then the King will say to those on His right hand, ‘Come, you blessed of My Father, inherit the kingdom prepared for you from the foundation of the world:

37 “Then the righteous will answer Him, saying, ‘Lord, when did we see You hungry and feed You, or thirsty and give You drink?

38 ‘When did we see You a stranger and take You in, or naked and clothe You?

40 “And the King will answer and say to them, ‘Assuredly, I say to you, inasmuch as you did it to one of the least of these My brethren, you did it to Me.’

41 “Then He will also say to those on the left hand, ‘Depart from Me, you cursed, into the everlasting fire prepared for the devil and his angels:

44 “Then they also will answer Him, saying, ‘Lord, when did we see You hungry or thirsty or a stranger or naked or sick or in prison, and did not minister to You?’

46 “And these will go away into everlasting punishment, but the righteous into eternal life.”

You’ll have to admit, it’s kind of an eye-opening story. The way I read it, there are a lot of people who are going to be surprised on the Day of Judgment. Some people will think they were awesome Christians in this life, and the Lord says He never knew them. And others who thought they never did anything for God will find out that they loved and served Jesus every day. What a nice surprise!

Whenever I read this passage, it always makes me want to re-think my relationship with Jesus Christ. Is showing compassion to others the habit of my life?

And there’s a wonderful flip-side to the story. Maybe our kids are just the kind of people that our God is looking for. Maybe their spiritual condition is better than we ever imagined.

Isn’t that a wonderful, comforting thought?

Dr. John L. Cash has spent the last 29 years being a country preacher in the piney woods five miles south of the little town of Hickory, Mississippi. (On week days has a desk-job at a public school, where he used to teach Latin on closed-circuit-television.) He and his lovely wife, Susan, live in the parsonage next door to the Antioch Christian Church (where “Kissie” the pastorium-Siamese-cat has been making a lot of noise during the middle of the night and waking folks up this week.) Their kids include Spencer (age 23), his wife Madeline (age 23), and Seth (age 20).