By Kelsey Fields, fitness enthusiast and boy mom to Max and baby boy on the way

January has come and gone, probably taking with it your motivation to hit the gym. I get it, life gets in the way.

All sorts of activities are starting up for the kids, your workload is heavy from the recent holiday and on top of that, you have to make time with your husband a priority!

Here’s the thing–and I know you’ve heard it a million times before–you have to take care of yourself before you can take care others.

How can you take care of yourself?

Rewrite your routine so you can find time for what makes you happy: If you can relate to any of the suggestions above, it’s time to consider rewriting your routine, and I would suggest truly writing it down in a cute weekly planner.

Start by scheduling your priorities. For example, for me it goes like this: church, kids, husband, gym and the weekly Denver Broncos football game.

Make sure that your priorities include the the things that make you truly happy–whether the thing that makes you happy is as trivial as spending an hour watching Friends on netflix while doing crossword puzzles on Thursday nights or as significant as saving puppies at your local pet shelter for three hours on Saturday mornings. Once you have made time for your priorities, allow others’ priorities to find a place in your new schedule.

Kelsey is a stay-at-home mom and full time student pursing a degree in elementary education. She is a Beachbody certified Insanity instructor, avid runner and yoga enthusiast.

When she is not working out, you will find her cheering on the Denver Broncos and spending time with her family. She is wife to Blake and mom to busy 2 year-old son Max and is expecting her second son in April.

SWMO Moms fitness category, which is full of healthy tips for all women,  is sponsored by Bass Pro Shops Outdoor Fitness Festival.  Their mission is to celebrate health and wellness, outdoor adventures and wildlife conservation in the beauty of the Ozarks. Programs are designed to include activities for people of all ages, backgrounds, fitness levels and areas of interest. CLICK HERE for more information or give them a call at 417.873.5214.

“The hardest part about running is lacing up your shoes and walking out the door.”

Tressie Duncan is no stranger to getting over what she says is the hardest part of running–lacing up her shoes and walking out the door.

After seven knee surgeries between the ages of 16-21, Tressie, was told she would never run again. Her knees simply wouldn’t allow it. Tressie, on the other hand, had just battled an incredibly hard season of her life and was in desperate need of stress relief. Her answer: running.

“I hadn’t ran since high school and I was told I would never run again, however, I had to do something. My stress level was at an all time high. My father had passed away and six months later my brother died. A short 2 months after the passing of my brother, my grandma passed away and I found myself in the middle of a divorce after 13 years of marriage. I had to find a way to cope. That’s when I began running again,” said Tressie.

After years of not exercising, in June of 2013, she decided it was time to rekindle her love for running. Starting was not an easy process, but she credits her success to high intensity training. She would walk for one minute, run for one minute and slowly increased her running time. After one short month, she completed her first 5k

“I was so proud because I actually finished the race. Yes, I walked. No, I was not fast by any-means, but I did it,” explained Tressie. “After finishing my first 5k, I was hooked! I began running in several local races around Southwest Missouri and set my goals high: I was going to finish the Bass Pro Outdoor Fitness Festival.”

And after 2 years of training, in November of 2015, Tressie did just that.

While miles 1-9 set the pace for a great race, unfortunately at mile 10, her knee dislocated. She was tempted to stop, but she pushed on. She had came to the marathon with one goal in mind and she was not going to let it slip away.

At mile 15, her knee hyper-extended. “My knee cap was on the side of my knee,” said Tressie.

“At mile 20, I had decided I was done. I was ready to quit. I had limped along in serious pain and I was done,” she explained. “That’s when my husband Brad, began the journey with me.”

Brad walked with Tressie and encouraged her along the way, but snuck away at mile 23 to move the car and have it waiting for her at the finish line. He knew she could do it all along.

And finish strong she did. Somehow, with 2 injured knees, Tressie walked across that finish line.

“When I finished, I said I would never do it again. This year, I am focusing on my faith and healthy eating habits, but I am still running. In 2017, I plan to once again complete the Outdoor Fitness Festival marathon. I know it won’t be easy, but I know I can do it.”

Happy Thanksgiving Eve! I am sure you are currently slaving away in your kitchen getting ready for Thanksgiving dinner. Whether you have one or multiple Thanksgiving meals to attend we know you are busy. If your like us, you can’t wait to dive right in to Thanksgiving dinner, however, don’t love gaining weight during the holidays. I once read that on average people gain between 7-10 pounds between Thanksgiving and Christmas! Eek! I don’t know about you, but I sure don’t want to do that!

Here are a few tips to keep the turkey off your hips!

Enjoy this holiday season, have fun, and don’t stress about the small stuff. Take a step back to take in the moment. Because it’s the little moments that mean the most and if you are too busy and stressed out you will miss out on what really matters!! 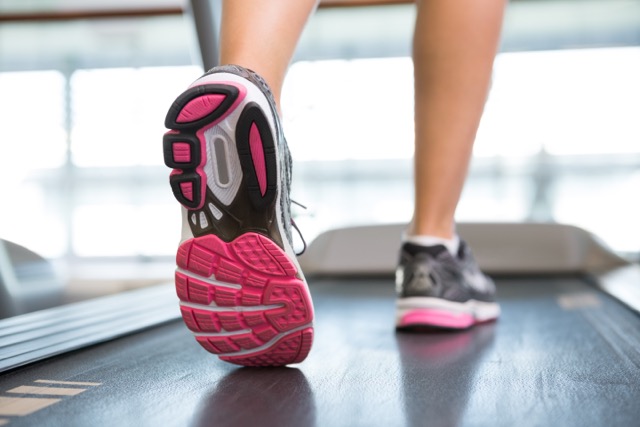 By Beth Gallini, runner mama of 2

The treadmill is a great training tool and provides an option to run when you might otherwise not be able to, whether that’s because of the weather, it’s too dark outside, or if you can only squeeze a run in while the kids are sleeping.

However, the treadmill frequently gets a bad reputation because it can be boring.

Trust me, I know – I used to be in the camp of calling it the ‘dreadmill’ and couldn’t manage more than a few miles on it. But then my husband and I brought home two baby boys and I had to learn to love it in order to keep training.

Although I still prefer to run outside, I have found ways to enjoy running on the treadmill:

Have everything you need before you start. It is tempting to use the convenience of your home or gym to get what you need when you need it, but treat a treadmill run like running outside and be prepared. This means you should go to the bathroom before you start and have water and anything else you’ll need with you on the treadmill so you won’t have to stop once you start.

Dress for warm weather. Regardless of what the temperature is outside, you will warm up quickly on the treadmill, so dress accordingly. If you are cold at first, you can wear a long sleeve top that you can take off after you warm up.

Bring a towel. A towel will serve two roles on the treadmill. First, I highly recommend covering up your time, distance, and speed. Unless I am doing speed work with specific intervals that I need to track, I always cover up my data screen so I’m not watching it creep along. Second, you may want a towel to wipe sweat off your face.

Find a ‘treadmill only’ show. Whether it’s a movie, a hit TV series you missed, a guilty pleasure reality show (me), or a sporting event (my husband), find something that will grab your attention and then only allow yourself to watch it on the treadmill. I pull up Netflix on my iPad and find a show that is a couple of seasons in to watch from the beginning — and then I only watch that show on the treadmill, so it serves as an added incentive. This was a game changer for me; I would not last long on the treadmill without having a show to watch!

Be sure to warm up. It is important to warm up when you first start your run and not crank the speed up right away. I find I need to warm up a little longer on the treadmill before I really get in a good rhythm, so be patient and find what works for you.

Play around with the speed and incline. A good way to get a little more from your workout and keep things interesting is to increase and decrease the speed and/or incline at random intervals. As I mentioned, I keep the time, distance, and speed covered and then I press the arrow keys up or down according to how I feel and see where I end up at the end of a run.

About Beth: Beth is mom, runner, running coach, and the blogger behind RUNNING around my kitchen. She and her husband adopted two boys who are a month apart and are 1 year old. Beth serves on the board for the Hogeye Marathon and is interested in helping other moms with their training and answering any questions you have.

If you’re rushed and don’t have time for a full workout, you can always find a YouTube video that matches up to the amount of time you have available. A little exercise and toning definitely beats none at all.

The Blogilates channel on YouTube is extremely popular, and it’s a great way to fit in an at-home workout that you can do during the baby’s naptime or even while the kids are playing in the floor beside you. Be aware that some of the videos are very challenging, so we’d suggest starting with the beginner series of videos if you’re new to Pilates or it’s been a while since you’ve done it. Here’s one in the Beginner Series that targets the abs and booty. Enjoy!